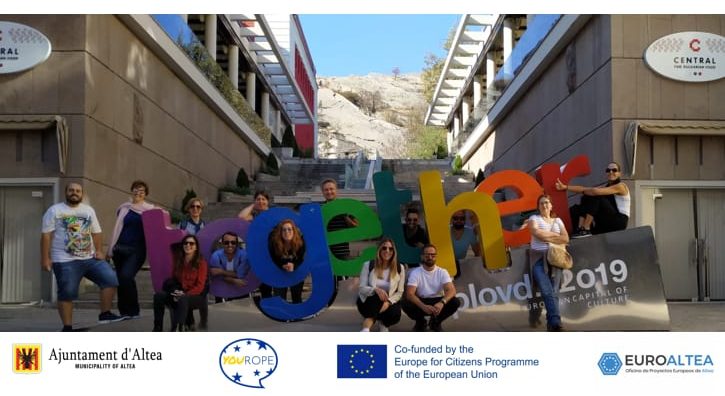 On the first day of the meeting the project partners had the opportunity to start the day with a professional tour guide and to explore the ancient city of Plovdiv (European Capital of Culture 2019). They’ve visited all the important landmarks of the city, which makes it so unique and diverse, that’s it’s a symbol for tolerance and inclusion of different races and religions through the history dating back 8000 years. After the exploration, the participants took a little rest and time for self preparation before the official opening.

They were welcomed by Mr Kristiyan Andreev – President of Bulgarian Youth Association, who is the host and in charge of the Bulgarian partnership of the project, together with Ms Paloma Verdu as representative of the LEAD partner, they’ve expressed their gratitude to the rest of the representatives for the great work from the previous meetings and wished everyone an active and successful contribution to the implementation of the project, as the final meeting of the Construction Phase.

Mr Kristiyan Andreev opened the sessions with firstly presenting the initiatives done by Bulgarian Youth Association since it’s foundation in 2014 and as well videos/presentations of Plovdiv and Bulgaria in order to break the ice.

Later Ms Paloma Verdu took lead in the Project General Implementation “Where are we now so far?”, where we’ve discussed about what happened so far, what local actions and disseminations have been done and how is generally the project implemented with an active discussion and where it’s leading to.

After the overview of the project, the next session “My role in the European society” started with people getting divided in smaller groups with different topics in order to brainstorm on what is the meaning of active citizenship and our role in civic life in Europe. Each group had limited time to brainstorm and later they were going clockwise to the next paper question. Eventually each group had the opportunity to present the final ideas they had (with a discussion held by all the groups).

The final activity of the day was also the most fruitful one. The topic was “Our Euro- space. Through different methods and brainstorming, the groups engaged in a deep conversation and discussion about the European youth needs, where many points and views were carried out. A lot was learned.

The evening finished with a traditional Bulgarian dinner in order to experience the local culture.

On the last activity day, we’ve made a little timeline exchange in order to fit better  the activities and the group. We’ve started with presentation of MasterPeace Foundation and MasterPeace Bulgaria and spoke about peace, stability, security and sustainability through volunteerism, art and music, as Bulgarian Youth Association was deeply involved in this until 2016. There was also videos and presentation of the International Day of Peace, which is celebrated Worldwide on 21 st of September.

Later we’ve went outside to the local park and all the participants had to make a positive message on paper/emotion through acting and a video about Peace, as this is something, which is important not only for the stability of the European union, but as well, for the world.

Since Plovdiv is European capital of culture, we’ve visited Foundation Plovdiv 2019, which is managing all the events and organization of Plovdiv as such during all the years from a candidate to a full Culture capital. We’ve visited 2 art galleries and started our next task from there.

Again, the representatives were divided in groups and had to think for 2-3 questions on the topic of “What is the EU doing in order to improve my life?” and later, they had to interact/engage with the local people and make interviews with those questions and film it.

The most important part of the day was the conclusion of the Declaration and defining it’s dissemination strategy, led by Mrs Paloma Verdu. After a detailed presentation and the followed discussion with which the final dates of the Brussels meeting were decided as 01-04 February 2020. The Group had to make a message and a promotional video of the declaration itself. First it started with individual groups by nationalities and it ended with one whole group with common objectives in order to raise the awareness of the importance of the declaration. It wen’t really well and professionally done.

The end of the activities finished with the “Open space for suggestions”, for which the Polish representatives took initiative. They presented to us the communication channels where we can promote the declaration, the mass media and how news could be turned into fake news and how to be careful and try to prevent getting misinformed or to misinform others.

The day finished with a general evaluation of the meeting in Plovdiv, where everybody had the chance to express their gratitude to the hosts for the good organization.

The guests didn’t go with empty hands, as they were sent with hugs and gifts from Plovdiv for the way back.  The official night finished at the most traditional Bulgarian restaurant in Plovdiv and with a lot of dances and good emotions and memories which to carry on for the next stages. The unofficial night was an initiated karaoke among the members, people from different cultures and background singing together for the farewell all night and looking optimistic towards a better and united Europe!